Does the Ocean Remember 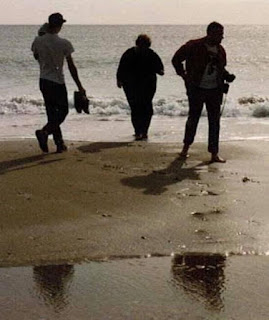 I have always loved seeing the ocean.   I’ve been lucky enough to see the ocean when it is peaceful and when it is storming.   I’ve seen the calming, relaxing waves as they come to shore and I have seen the larger waves during a storm that shows the power of the ocean.

I can remember the very first time I saw the ocean, not the exact day, but the circumstances around it.  I was at Marine Corps bootcamp and I was 18 years old. We were on a hump, or what civilians would call a hike, except we were in uniform, wearing combat boots and carrying about 70 pounds on our back.    I remember the first glimpse of the ocean and its beauty and how it seemed to just go on forever.    I remember getting to the beach and seeing, hearing, and smelling the salt water.   If I close my eyes and think hard enough, I can feel that memory.   It is one of my favorite memories.

I remember the last time I saw the ocean; it was during the summer of 2020.    I returned to a beach where I had a lot of memories in North Carolina.    I had been to the ocean several times since I left North Carolina in 1994 but I had not been back to that location in 26 years.

During that trip we spent four days staying on the beach, and I think I felt every emotion possible.   This was not something I was expecting or prepared for.   I had so many happy and so many sad memories attached to this part of the ocean.   It was from what seemed to be like a different life of mine.    When planning this trip all I could think about was how nice it would be to see some of the same areas, see the base I was stationed at, and see the ocean where we used to go on weekends on a regular basis.

When we arrived at the hotel our rooms had a view of the ocean and a patio with a door that opened so I could see, hear and smell the ocean again.  We were going to be there for several days. I was so excited; yet, within an hour of being in my room, I started to cry, and I could not figure out why. I was just overwhelmed with emotions.    Often, I felt some emotion when looking at the ocean, but this was different.

As my feelings of being overwhelmed started to settle, I looked at the ocean.   It became clear what was happening.    So many memories were rushing in.   Almost like every wave that crashed on the shore, was another memory.  Some memories where happy, some were sad, and some brought up some complex emotions.

Some of the happy memories that the ocean brought me that week.

Memories of Christmas 1992 – my mom, dad and brother skipped buying gifts for each other and used the money to come out to North Carolina to visit us and to meet Joshua, their first grandchild and my brother’s first nephew.   On Christmas Day we went to the ocean.   My mom, brother and I walked in the ocean even though it was too cold to swim.   We laughed and had so much fun!    This was the one and only time my brother got to see the ocean. This trip was also the last time I ever got to see him alive.  I am so thankful that fun memory.

Another happy memory the ocean reminded me of was weekend trips with my oldest son Josh, when he was a baby. I remember one time while crawling on the beach he decided to crawl right towards the ocean! Luckily as fast as he was, we were a little faster and prevented him from crawling into the ocean.

The ocean brought me some memories that weren’t so happy

On March 21st 1993 my wife at the time, Josh and I went to spend the day at the ocean. It was such a beautiful day and we enjoyed the waves and sun.  When we got home, the phone was ringing. When I answered the phone it was my dad.  He told me my brother had been in a car accident and died.   I have felt so much hurt and pain over this day.  Losing my brother was painful.  I felt guilty for enjoying the day, while my brother’s life was cut short. I also felt guilt and anger at myself because my parents had been trying to get ahold of me, but we were at the beach and I wasn’t there for my family.  If I could have gotten the phone call sooner, maybe I could have got a flight out that day instead of waiting until the next day.    So much pain associated with that memory.

On July 18th, 1993, my wife at the time, Josh and I went to the beach that day.   But that day was different.  I had already made the decision to end my life and it was going to be that day.  This trip to the beach was my way of saying goodbye to my immediate family.   After returning home that afternoon, I attempted to end my life.  Thankfully my wife interrupted my attempt.

As I sat in my room last summer watching the ocean, it continued to bring me so many memories.    At one point, I became angry.  I was angry for the version of myself I lost 26 years ago.  I was on a path, the path I thought I wanted to be on and everything changed. For a few minutes I felt like the ocean was slapping me in face with each wave reminding me of what my life could have been like.

Throughout the four days we were there I spent hours just watching the ocean from my room.   At first I really regretted returning to this particular part of the ocean.    I never actually went into the ocean on that trip.  However, over those four days of having the ocean bring in these memories, it ultimately became a healing process for me.   I think that it helped me make peace with part of my past that was still holding me back.

The ocean brought me so many memories during this trip, it makes me wonder if the ocean remembers.