The Day My World Changed Forever 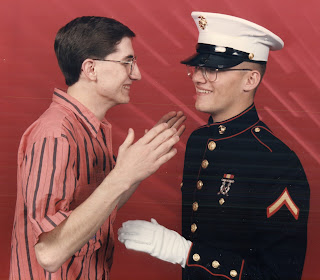 As I was trying to decide what to blog about this weekend, I had many things I thought about writing, but deep down I knew what I needed to share.

March 21, 1993 was the day that changed my life forever.  I can remember that day like it was yesterday.   That was the day my youngest brother and only sibling,  Mathias died in a car accident at age 17.   I was 19 years old. At the time I was living in North Carolina.   My brother was my best friend growing up and the grief of that loss put me in a downward spiral that resulted in my attempting suicide less than four months later.

I had struggled with depression most of my life, many times wishing I wasn’t alive, but it wasn’t until the days following my brothers death, that I actually wanted to die and eventually resulted in my suicide attempt.

This will be the 24th anniversary of his death and it has been a very long and tough journey.  "Mathias each year I mourn your death, I mourn my loss of your friendship, being your brother and I mourn that I won’t ever be an uncle to your children."   Each year I cry; sometimes externally, sometimes internally, sometimes both.  I usually try to keep myself very busy on this anniversary and this year will be no different.

In the 24 years since my brother died, I have felt  lost so many times.   I remember someone asking me many years ago to look for the good in his loss.   My response was pretty much "Fuck You".

But as I sit and reflect the weekend before this painful anniversary, I can say I have learned a lot in this time. I’m not going to say it’s a silver lining, but I have grown as a person.   I am able to use the pain I have felt to allow me to better connect with the people I work with who are experiencing emotional pain.   Without my being suicidal and attempting suicide, I would have never gotten involved in suicide prevention and I would have never felt this passion, this drive to make a difference.

Clinically I have learned what risk factors  and warning signs are and which ones I had. I also learned what drivers I had as well shadow factors.   I know now when my sleep gets really bad I'm at risk, and need to make changes.     This knowledge allows me to help me look for these things, as well as other things, in others.

I have learned I will always hurt, I will always have this void, and that is okay. Your life was worth me feeling a void, but  I know that void doesn’t have to define me.   I can use this to help others who also feel a void.  I also no longer have to say what if, I can say, what can I do.

So to my brother, "I always will love you.  I will always miss you.  Your death has forever altered me.   I will choose to continue to move forward and you will always be a part of this with me."